Women and men, girls and boys, must restructure how we spend our time if we want to be loving. We cannot be overachievers and perfectionist performers from kindergarten on in our public lives (the world of school and work) if we are to learn how to love, if we want to practice the art of loving. Genuine love requires time and commitment. And this is simply the case for love in the context of partnership. Self-love takes times and commitment, particularly on the part of those who are wounded in the space where we would know love in our childhoods. New women today, the late-twenties and thirty-something crew, are as reluctant as their patriarchal male counterparts to make time for love. Wise aging women know that one of the keenest regrets a large number of females experience in their lives is failure to understand early the power and meaning of love. Not only would that knowledge have afforded an understanding that would have prevented them from ending up emotionally abused and battered, it would have ushered true love in to their lives sooner rather than later.

My hope for younger generations of women is that they will examine the unfulfilled spaces of their lives soon and boldly, unabashedly choosing to do the work of love, placing it above everything. Again and again it must be stated that when I talk about doing the work of love, I am not talking simply about partnerships; I am talking about the work of self-love in conjunction with the work of relational love. Visionary feminist thinkers were among the first group of people to call attention to the disservice we women do to ourselves when we act as though it were important only to find the right partner, someone to love, rather than to choose a circle of love. When we place emphasis on building a beloved community, of which having a partner may be an essential part but not the whole, we free ourselves to lead joyous lives as single folks, (in or out of partnership with another).

Memorial Day – “a legal holiday in the U.S. in memory of the dead servicemen of all wars.”

That’s how Webster’s defines Memorial Day, but is that what takes place? Has this day of remembrance become just another holiday; another three-day weekend; a day of forgetting?

Memorial Day can be a powerful reminder and opportunity for honoring and remembering our dead; for paying homage to those who died believing that their lives made a difference; that their lives were sacrificed for the benefit of others.

In many respects, those who have died for this experiment in democracy are still living. They’re living in the water we drink, the food we grow, the ballot we cast, the policies we protest, the pains, sorrows and struggles of everyday life.

I respect the men and women who fought to end slavery in the Civil War and those, like my grandfather William, who fought in World War I, believing it would be “the war to end all wars”. I remember and give thanks to my father-in-law, who fought during World War II against the Nazis and lost his parents, grandparents, family and friends in the concentration camps. I thank my father, who went away for years to an unknown fate to stop the dictatorships of German and Japanese governments during the second world war. And I remember and honor all those who died in Lebanon, Panama, Viet Nam, on 9-11, Iraq and Afghanistan, as well as those who returned from those conflicts and died from resulting disease, addiction or suicide.

Before we can ever proclaim, “Never again!” we must exclaim, “Never forget!” Never forget the soldiers and civilians who have perished. Let us honor they’re memory, by keeping them in our hearts and doing everything possible to prevent and end the wars that have caused such great sorrow and suffering. Take some time to bring out pictures, tell stories, make a toast, thank those still living and recommit our selves to the peaceful resolution of conflict.
Memorial Day reminds us that blood and tears are the same in any language. Every life is precious and every loss must be remembered, mourned and honored.

These thoughts and reflections are an excerpt from Good Grief: Love, Loss & Laughter.

Futbol Club Barcelona (FC Barcelona) did it again! They won the Champion’s league for the second time in 3 years! In one of the most difficult and highly respected tournaments of club futbol anywhere in the world, the best team in the world, pulled it off once more.

Not only did they FC Barcelona win the Champion’s League final, but they also won La Liga (Spanish League).

About half of FC Barcelona’s staring 11 were on the 2010 world cup winning Spanish national team. They have played together for many years now. Add the likes of one of the greatest players in history (Leonel Messi), Brazilian Pedro and Malian Keita and you have what many would call a dream team. Lionel Messi runs with the ball, as if it is stuck to his feet and changes direction and moves so fast, that he either dribbles through entire teams or gets fouled. Once he sees goal, he rarely misses. He scored over 50 goals this season alone!

Xavi Hernandez, who is the oldest player on the team (at 31) is the best midfielder presently playing anywhere. He completed over 91% of his passes during the championship game against Manchester United! FC Barcelona possessed the ball for over 70% of the game, giving few chances for their opponents to do anything.

You could write all day and night about the amazing attributes of this young FC Barcelona team, but one of my favorites is the fact that they do just that, they play as a team. They appreciate and acknowledge every players role and contributions and pass and control the ball as if they were simply tying their shoes or having lunch. Even though they have lots of stars, there is very little individual ego. They are indeed proud, but proud of themselves as a team. And they should be. They are and will be known as, one of the best teams to ever play the game. 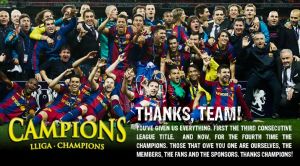 After hosting her TV show (The Oprah Winfrey Show) for 25 years, Oprah’s final show and words were as golden and true as they have been all along. If you took the words and teachings of Dr. Maya Angelou, Rev. Debra Johnson and President Barack Obama and rolled them into one, it would sound similar to Oprah.

The reason Oprah connects so well with people she meets (on her show and otherwise) and her TV audience, is because she continues to practice and live by a number of tenets that hold true for us all. These include: honesty/authenticity, acknowledgment, compassion, listening, self-worth/self-acceptance, reflection/meditation, understanding, gratitude, forgiveness and validation. All the necessary qualities for being a good counselor, good friend, parent, lover, teacher… or simply a good human being.

She talked about these lessons and insights on her last “farewell” show (love letter) and held us all close to her heart. Her new network, OWN, will be a continued extension of putting these qualities on television and looking at our inner and outer adventures and journeys, in order to learn and grow.

Oprah has, is and will continue to be a treasured and valued teacher for us all.

May 28 is a day that changed the human rights movement forever. Fifty years ago one person – Peter Benenson – outraged by injustices he read about in the paper, asked others to unite with him in common action.

He knew we could use our activism to achieve extraordinary things. He created Amnesty International.

Change did not happen overnight.

It took many conversations, many letters. Friends spoke to family members, the message spread, and one by one we secured the release of tens of thousands of people. People imprisoned for their beliefs or their way of life.

As activists lobbied governments, and researchers interviewed survivors, we demanded accountability for previously untouchable leaders. One by one each person who took action changed laws and changed lives.

50 years on, our work is not done – but we are more determined than ever to protect human rights. 50 years has shown that one by one we can. We have.

So today, we thank you for your work to defend human rights. Will you celebrate our birthday today?

In honor of 50 years of hard work and meaningful change, wish Amnesty a happy birthday today on Facebook, Twitter, and to your friends and family at home.

The Ihangane Project provides funding and programmatic support for projects that are generated from people living in underserved communities that are most impacted by HIV. Ihangane means ‘to be patient’ in Kinyarwanda, the native language of Rwanda. We believe that by supporting smaller projects that have been generated by those living in areas hardest hit by HIV, we can make sustainable improvements in the lives and health of people living in those communities. We believe that with patience, one person at a time, one idea at a time, one project at a time, we can make a lasting positive impact on the lives of many!

We Invite You To Learn More About Our Current Projects!

Donate to The Ihangane Project.

Excerpt from ROP Stories. A blog for the Rwandan Orphan’s Project.

Chan-tastic
Posted on April 26, 2011 by Jenny Clover
(This post was originally posted in Jenny’s Blog, A Fish Called Rwanda)

Yesterday Sean and I watched in amazement at the reaction that the two magic words “Jackie Chan” evoked in the smaller boys at the orphanage. Some jumped up and down, eyes tightly closed in ecstasy; some punched the air; all whooped; one looked like he might wet himself with happiness. 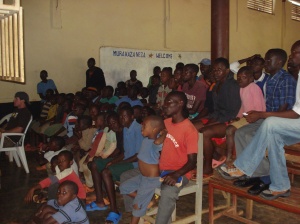 We now have a projector at the Centre and when dad visited he brought over some DVDs for the boys. I’m not sure why, but every male under the age of about 20 that I’ve met in Rwanda goes absolutely crackers for Jackie Chan. They don’t seem to have heard of any Hollywood stars, but they all know old JC and they adore him. It must be the non-stop action and silliness, and the lack of much real dialogue that’s so engrossing for them. So yesterday, we decided to show Jackie Chan’s First Strike in the dining room.