Behind closed doors in homes throughout California, more than 200,000 domestic workers — mostly women — work without the basic protections afforded almost every other worker. 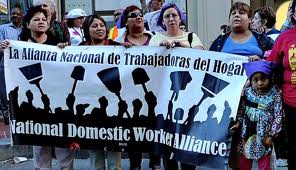 Sixteen percent of domestic workers have worked for no pay at all, cheated by their employers or receiving a bad check. Others work for more than 12 hours a day without receiving overtime pay, and aren’t even able to eat a healthy meal of their own choosing or get a full night’s sleep.

The National Domestic Workers Alliance led the fight for domestic workers rights in New York last year and won a comprehensive Bill of Rights — the first of its kind. Now, it has started a petition on Change.org to help do the same thing in California — legislation will be voted on by the State Senate next month. Click here to sign the petition to win California’s domestic workers the same basic rights and protections available to the rest of us.

If Californians from all walks of life press the State Senate, lawmakers will have to follow New York’s lead to afford basic labor rights to hundreds of thousands of workers. Click here to sign the petition calling on the California State Senate to pass a Domestic Workers Bill of Rights.

Thanks for being a change-maker,

– Cristina and the Change.org team