Breaking: What I saw in Syria

I recently returned from a months-long fact-finding mission to Syria where I witnessed first-hand the extent of the atrocities being committed by government forces and militias working alongside the military. 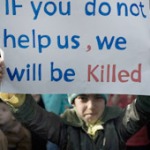 In Aleppo, Syria’s largest city, I saw people — including a 16-year-old schoolboy — being shot dead and injured by security forces and militias during peaceful demonstrations. Elsewhere in every town and village I saw homes burned down to the ground and spoke to families of young men who had been dragged from their homes and murdered by soldiers. The abuses were systematic and massive in scale. More recently opposition fighters have also been committing abuses and the situation is likely to deteriorate further the longer this conflict goes on.

People who care — like you — must speak out against this senseless violence. Your donation today will help support Amnesty International’s actions to uncover the truth, demand accountability, and prevent human rights abuses in the future.

As you read this, intense fighting between government forces and opposition fighters is taking place in Syria, where residential neighborhoods have been turned into battlefields and civilians are more at risk than ever. Tens of thousands have fled their homes just in recent days, joining the hundreds of thousands who have been displaced in the past year.

Despite the escalating violence, the international community has tragically failed to take effective action — essentially standing by as children, women and men are slaughtered.

That is why it is imperative that Amnesty International continues its efforts speaking out on behalf of Syrian civilians and taking critical steps to hold accountable those responsible for crimes against humanity and war crimes.

Your donation will help us:

Send other researchers like myself into the field to document atrocities and share them with influencers and leaders around the world.

Put pressure on the United Nations Security Council to take concrete action to protect the civilian population and to hold the perpetrators of these terrible crimes accountable.

When atrocities like what I’ve seen in Syria are committed, we must not turn our heads or despair that there is nothing we can do. We must keep global attention on Syria. Your donation can make a difference.

P.S. Want to learn more? Watch a first-hand account of my fact-finding mission.