Facing 2 years in jail for singing a song criticizing President Putin in a church, a member of Pussy Riot gestured to the court and said in her show-trial’s closing statements, “Despite the fact that we are physically here, we are freer than everyone sitting across from us … We can say anything we want…” 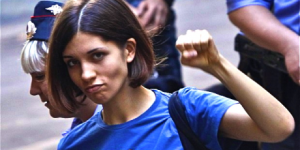 Russia is steadily slipping into the grip of a new autocracy — clamping down on public protest, allegedly rigging elections, intimidating media, banning gay rights parades for 100 years, and even beating critics like chess master Garry Kasparov. But many Russian citizens remain defiant, and Pussy Riot’s eloquent bravery has galvanized the world’s solidarity. Now, our best chance to prove to Putin there is a price to pay for this repression lies with Europe.

The European Parliament is calling for an assets freeze and travel ban on Putin’s powerful inner circle who are accused of multiple crimes. Our community is spread across every corner of the world — if we can push the Europeans to act, it will not only hit Putin’s circle hard, as many bank and have homes in Europe, but also counter his anti-Western propaganda, showing him that the whole world is willing to stand up for a free Russia. Click below to support the sanctions and tell everyone:

Last week’s trial is about far more than three women and their 40-second ‘punk prayer’. When tens of thousands flooded the streets to protest rigged elections, the government threw organisers into jail for weeks. And in June Parliament effectively outlawed dissent by raising the fine for unsanctioned protest an astounding 150-fold, roughly the average Russian’s salary for a whole year.

Pussy Riot may be the most famous Russian activists right now, but their sentence is not the grossest injustice of Putin’s war on dissent. In 2009, anti-corruption lawyer Sergei Magnitsky, who uncovered a massive tax fraud at the heart of Russia’s power dealers, died in jail — without a trial, on shaky charges, and with medical attention repeatedly denied. 60 of Russia’s elite have been under scrutiny for the case and its cover-up, and the sanctions the European Parliament is proposing are on this inner circle.

International attention to Russia’s crackdown is cresting right now, and the ‘Magnitsky sanctions’ are the best way to put the heat on Putin and help create breathing room for the suffocating democracy movement. Let’s give Europe’s leaders a global public mandate to adopt the sanctions. Sign the petition now and share this with everyone:

What happens in Russia matters to us all. Russia has blocked international coordination on Syria and other urgent global issues, and a Russian autocracy threatens the world we all want, wherever we are. The Russian people face a serious challenge, but we know that people-powered movements are the best cure for corruption and iron-fisted governments — and that international solidarity can help keep the flame of these movements alive. Let’s join together now to show Putin that the world will hold him to account and push for change until Russia is set free.