My latest attempt at stone carving. This is from a piece I bought at the Rock Stop in Navarro on the highway between Cloverdale and Mendocino last summer. It is probably from the Navarro River or near by. I’m not sure what kind of stone it is, but know it was pretty hard to work on. It has some beautiful grain, color (browns) and white lines. What started out as my attempt to make a thin wave or crescent moon, became something that looks like a dolphin. 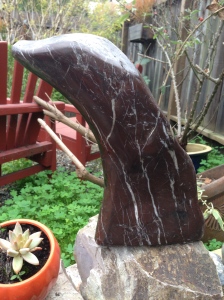 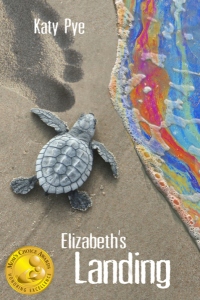 Let’s get straight to the point. This is one hell of a good story for adults of all ages (young and old). It deserves all the awards it has received and then some. Superior to many traditionally published works, Elizabeth’s Landing combines complex characters, believable families and community and global environmental issues, with a seamless and engaging flare.

Uprooted mid-school year to the Texas coast town of Port Winston, Elizabeth escapes from her cantankerous grandfather, missing her absent reporter mother, and her seemingly submissive father, to explore the county’s last wild haven, called Wayward Landing Beach. It is there that she discovers nesting sea turtles and is faced with some local teens bent on harming her and the turtles. While trying to save the turtles, she meets Maria and Tom from the Science Center and is drawn to their work and mission.

It is obvious from the get go that Ms. Pye has extensively researched her subjects: turtles, shrimping, habitat, The Gulf Coast, The Horizon Oil Spill, and local politics; and integrated them into the story without any trace of regurgitating news or sounding like a lecturer at a science museum. Elizabeth, her family, friends, and those she meets at the Marine Science Center, are imbued with realistic doses of sadness, anger, frustration, determination, secrets, fear and hope.

What’s not to like about Elizabeth? She’s shy, concerned about how she is perceived by others, lonely, and out of step with other kids at school. She doesn’t think her father understands her or stands up to her grandfather, who is always putting them down. She’d rather die, than tell anyone how she feels and when she does, she’s afraid she’s revealed too much. If she doesn’t sound like other people her age, or yourself when you were a teen, then you must be perfect. Reader’s will identify with and root for, Elizabeth, as if she is your friend, daughter or sister.

If it’s not been stated clearly or often enough, Elizabeth’s Landing is a fantastic novel. “Must Read” is often used to advertise stories and get people’s attention, but in this case Ms. Pye has written a story that is truly a must read.

Gabriel Constans is a reviewer for The New York Journal of Books, a novelist, screenwriter, journalist and non-fiction writer. His latest work of fiction is The Last Conception.