Archive for the ‘satire’ Category 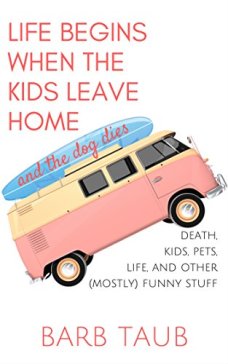 Life Begins When The Kids Leave Home And The Dog Dies by Barb Taub. Reviewed by Gabriel Constans.

Okay, this is a seriously funny collection of essays and columns about mothering, children, and relationships. Life Begins When The Kids Leave Home And The Dog Dies presents insights and experiences, with which the author decided were better to laugh about than to cry over. All to the readers’ benefit. Not only is she able to have a laugh at the families past expense (and present), but she does so with insight and knowledge that only a super-mom would understand. If you are ready to cut loose for a big dose of parenting reality, check out this gem.

The chapter titles alone give a hint of what’s in store for those lucky enough to get there own copy. “Serial Kid-Producer Reveals Top 10 Reasons Not To Have Kinds”, “Penis Envy Or The Revenge Of Your Sixth-Grade Science Teacher”, “How To Embarrass Your Child”, “Free Parenting Advice: Worth What You Pay For”, “Etiquette Lessons For Attilla The Hun”, “How To Raise A Son. Or Not”, and one of my favorites, “To My Mother & Daughters. ‘Sorry About… You Know… The World'”. Here’s a hilarious example from “How To Terrorize Small Children”.

“I committed an Easter crime once. I was persuaded to dress up in a bunny costume for my daughter’s preschool class. The teacher opened the door and I teetered, six-plus feet (counting the ears) into Easter excitement. For about a nanosecond, there was complete silence while I held up the basket of plastic eggs. Then eighteen mouths were screaming for eighteen mothers, thirty-six eyes were filling with tears, and seventy-two tiny arms and legs were churning toward the door. We’re not even going to discuss what happened in eighteen little pairs of undies as I single-handedly drove the roomful of preschoolers ballistic with terror.”

Life Begins When The Kids Leave Home And The Dog Dies is not for any perspective, or present, mothers (and fathers) who wish to live in a fantasy land of what it “should” be like. Than again, maybe it’s just what the doctor ordered. Barb Taub’s writing is the best review you’ll ever need. “Help Wanted: Mom. Expanding organization seeks Director. Qualifications: must know how to put toilet paper on spindle, prepare creative and interesting dishes for staff to refuse if they don’t involve the words ‘peanut butter’ and serve as walking Kleenex to small staff members. On-call 24/7, no pay, no sick leave, no chance of promotion. Job security, annual recognition breakfast, company care.”

Taking Liberty With the Truth

For my satirical book of koans, stories, and words of wisdom (Zen Master Tova Tarantino Toshiba: The Illustrious and Delusional Abbess of Satire), I used the same format that was used in the 1961 classic book Zen Flesh, Zen Bones: A Collection of Zen and Pre-Zen Writings. Zen Flesh presented the sayings, teachings, and koans of real Japanese teachers, whereas Zen Master Tova takes liberty with a fictional character and the truth, to put it mildly.

Nan-in a Japanese master during the Meiji era (1868-1912), received a university professor who came to inquire about Zen.

Nan-in served tea. He poured his visitor’s cup full, and then kept on pouring.

The professor watched the overflow until he no longer could restrain himself. “It is overfull. No more will go in!”

“Like this cup,” Nan-in said, “You are full of your own opinions and speculations. How can I show you Zen unless you first empty our cup?”

“Can cats and dogs attain enlightenment?”

“Can all animals reach Samadhi?”

“Do insects and bugs have Buddha-nature?” Sister Sexton persisted.

“Yes, they do,” The Master, patiently replied.

“Is it possible for vegetables, fruit, and flowers to see their true selves?”

“What about dirt, grass, trees, rocks, and water?”

“All life can become conscious of its true nature, even if it does not have a consciousness, as we know it.”

“Then surely, all women and men can awake to their Buddha-nature and find peace?”

“Yes, all women can express their Buddha-nature and attain enlightenment.” Master Tarantino paused, “As far as ‘all men’. I’ll have to think about that.”

Perhaps this use of fact and fiction are more intertwined than we like to believe, and history is permeated with realities which have been diluted, reinterpreted, and/or intentionally changed, in order to favor, or present events, or beliefs, in the manner and fashion that the writer in the moment chooses, or “believes” to be true. Read Zen Master Tova Tarantino Toshiba and do your own sniff test to see if any of it rings true, or it is a total farce. 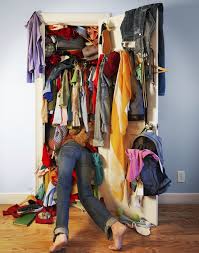 Master Tova’s niece, Chantall, had recently arrived from the land of the Maori to care for her aunt in her final days. The first thing The Master requested was that Chantall clean out her bedroom closet.

“It would be my pleasure Auntie. Where would you like me to put everything?”

“Just clean it out first, then we’ll figure out what to do with it.”

Chantall went to work and was surprised to find such an array of items packed into such a small space. She pulled out three bags of clothes, ten pairs of shoes (including some sequined platform clogs), a shredded bed roll, five pairs of candlesticks (which were melted almost to the wick), fifteen unmatched socks, a pair of rusty engraved silver scissors, scroll after scroll of some ancient texts (which she could not read and did not understand), two balls of yarn, a broken knitting needle, seven lightweight blouses (with stains and various colored material), a large pair of men’s pants, a moth-eaten velvet hat, an earring, nose ring, ankle and wrist bracelets, an array of playing cards, a begging bowl, an ochre-colored robe that had turned almost gray, a wooden chess set, two brass bells, some old letters (which she planned to read as soon as her Aunt drifted off to sleep, as they appeared to be love letters), a drawing of an elephant sitting in meditation, and a necklace with a green emerald pennant in the shape of a Bodhi tree. Clearing out the closet took much longer than she’d expected.

“Now what Auntie? What would you like me to do with all your things?”

“We must first clear out the closets of our mind, before we can be free,” Master Tova replied. “A mind cluttered with ideas, thoughts, the past, the future, or desire, will never find freedom.”

“Okay,” Chantall said, “but what do you want me to do with all this?” She nodded towards the high pile of Master Tarantino’s possessions.

“That? That is nothing more than a collection of matter, which had been stored inside a container of matter. Holding on or letting go of material objects makes no difference. It is our attachment to people, places, or things which causes suffering and keeps us on the endless wheel of karma.”

“Yes. I understand Aunt Tova, but where should I take it? What do you want me to do with it?”

“Oh, I don’t know. Just leave it. Better yet, why don’t you take what you wish, give some to your mother, and distribute the rest to charity?”

“I’m not sure how to say this Auntie, but most of this is useless. It wouldn’t even be worth donating.”

“Then burn it all. Light a pyre and reduce it to dust, just as I will soon become.”

Chantall took load after load out into the light of day, built a fire, and started throwing Master Tarantino’s material goods onto the fire. She kept the ancient scroll, the necklace, and a bell. She tried to retrieve the love letters, which she’d inadvertently thrown in with everything else, but it was too late. Then she returned to her aunt’s room.

“It is done Auntie.”

“Excellent. Now you are free. There is nothing holding you back. You can move on.”

“Those were your things, not mine.”

“Well, it doesn’t matter, does it? Desirelessness is a trap and desire is liberation.”

As Aunt Tova drifted off to sleep, Chantall quietly tiptoed out of her room, wondering what she would have found in her aunt’s love letters, and berating herself for having inadvertently thrown them into the fire.

Chantall told this story to her mother after she returned home from caring for Aunt Tova. Her mother wrote it down and later passed it on to an undisclosed student of her sisters community.

An excerpt from Zen Master Tova Tarantino Toshiba: The Illustrious and Delusional Abbess of Satire, whoever that is.

Mistress Toshiba and her adherents were walking back from town when a long-time student of Zen, who had studied with another teacher for fifteen years, passed by.

“Why do you laugh Abbott Toshiba? Was it something I said?” The Mistress laughed again. “Are you laughing at me?” That question made Mistress Toshiba laugh even harder. She fell to her hands and knees with laughter. She was laughing so hard that she began to roll around on the ground.

“I don’t see what’s so funny!” the student exclaimed.

The Abbott was finally able to constrain herself and propped herself up with her hand.

“If you could see yourself, you would be laughing too,” Mistress Toshiba grinned.

The students looked at themselves up and down and didn’t see anything out of place or a cause for ridicule.

“What are you talking about? There’s nothing funny about me.”

“Like I said,” the Abbott replied, brushing the dust off her robe as she stood. “If you could see your SELF, you’d be laughing too.”

At that moment, the passing student realized that she did not know what her SELF was, let alone if there was such a thing. She immediately fell too her knees.

“Dear Master Toshiba, I beg that you take me as your student and allow me to attain wisdom in your community.”

“You are welcome to join us, whoever you are,” the Abbott replied, “but you do not need my permission. Who do you think ‘I’ am anyway?”

Singing Koans by Master Tarantino. Collected by Abbott Jingo in 2222. An excerpt from Zen Master Tova Tarantino Toshiba: The Illustrious and Delusional Abbess of Satire.

What is the “real thing”?