A tall tale from Zen Master Tova Tarantino Toshiba: The Illustrious and Delusional Abbess of Satire.

The redwoods in Asia, being especially tall, were a favorite of Abbott Tova. She loved to climb as high as she could and observe life from above. She saw wildlife, people in the village, travelers on the road, and her sisters in the community below. Seeing that her excursions climbing the ancient ones were made in secret, she often witnessed events and scenes that others were not aware of. 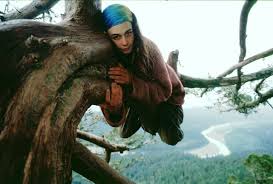 One day, she saw a herd of rampaging river otters approaching the village and was able to scamper down the tree and go warn people of their approach just in time. Many lives were saved. Some thought the Abbott must be clairvoyant for knowing of the approaching otters, not knowing of her climbing feats.

On another day, the Abbott watched a bandit attack a lone farmer on the road and steal his money. She knew who the bandit was and was later able to assist in his capture and testify at his trail, as to what he was wearing that day and at what time it had taken place.

There was the time Abbott Tova saw Sister Kiva sneaking off with Sister Bhakti to make love in the meadow. In that case there was no need to do anything, other than turn her attention elsewhere.

As was the case with Abbott Tova’s ability to remain still and blend in with her surroundings in the garden for hour upon hour, so it was in the trees where she often lost track of time and became so engrossed and selfless that she could feel the sap flowing through her veins and her limbs transferring the sun’s light into energy through her skin.

Without it being called so at the time, Abbott Tova was the first known tree hugger. Her actions gave rise to a long line of environmentalists and forest advocates, including, Pocahontas, Johnny Appleseed, John Muir, Henry David Thoreau, Chico Mendes, Wangari Maathai, and Julia “Butterfly” Hill. It also gave her a great advantage in “seeing” the future, making predictions, and others believing she was omnipotent, which she would never deny, nor confirm.

Metaphor’s Be With You

A timeless excerpt from Zen Master Tova Tarantino Toshiba: The Illustrious and Delusional Abbess of Satire.

The great Abbott used to always say, “I’s am what I am.” She wanted people to be real, to be themselves. She had little patience of fakers, swindlers, liars, or those that put on robes of pretention or airs of superiority. She was down to earth, honest, sincere, and forthright.

One day a great yogi walked across the water and presented himself before the Abbott, and the sisters who were having a picnic by the lake.

“Bread?” the yogi replied. “If I can walk on water, what need do I have for mortal food?”

“Well,” she replied. “Excuse me, you fancy pants immortal.”

“I am not immortal. I am born and will die like all human beings, but if you or your sister’s choose to receive powers beyond belief then follow me.”

“Powers?” the Abbott replied. “Walking on water is nothing. Try being a woman, giving birth, or holding up half the sky. Now, that’s what I call something special.”

The great yogi had no reply. He turned around, walked out upon the water, and slowly sunk into the lake.

Some may say these events never took place and others may say it is a metaphor. May the metaphors be with you.

I Can’t Hear You!

A sleep-deprived excerpt from Zen Master Tova Tarantino Toshiba: The Illustrious and Delusional Abbess of Satire.

There was an older man named Alejandro, who lived down the road from the Abbott’s monastery. He loved playing music from Mexico and the land of the Incas and played it night and day. He was hard of hearing so he had to play the music as loudly as he could, so he could hear his own voice and accompanying drum. Sometimes, he would drum and sing until he fell asleep just as the sun rose.

A number of the nuns were upset with Alejandro and complained to Abbott Tova about his annoying, and off-key voice and drumming, keeping them awake night after night.

The good Abbott knew that Alejandro pined for his childhood sweetheart, whom he’d married and lived with for sixty years. She wasn’t about to ask him to stop, but also understood how difficult it could be to sleep when his voice and instrument’s sounds traveled through the night air and seeped through one’s pores like slow torture.

“Please, do something,” one of the senior nun’s, Sam, implored Abbott Tova.

“I cannot ask him to stop, nor will I,” the Abbott replied.

“Then many of the nuns will fall asleep during practice and miss their chance for enlightenment,” Sister Sam retorted.

“If they are not able to awaken during sleep, then I have taught them nothing.”

“So what? We’ll starve and live in filth, is so what.”

“You are only seeing two alternatives Sister Sam. Telling Alejandro that he can no longer sing for his lost love and find what little comfort it gives him, or letting him sing and our community goes to ruin.”

“I don’t see any other way,” Sister Sam surmised.

“Then you are caught in Limited Mind and must have slept badly. There is always another way.” Abbott Tova went to her chest and began rummaging around and throwing out one item after another. “Ah, here they are,” she said, and handed a bag to Sister Sam.

Sister Sam opened the bag, picked up a small wax ball and said, “What in the Goddesses name are these?”

“Are you blind, as well as sleep-deprived?” the Abbott laughed. “They’re earplugs.” Abbott Tova took a pair from the bag and placed them in her ears. “I’ve been wearing them for years and sleep like a baby. Hand them out to the nuns and there will be no more problems.”

“Oye veh!” Sister Sam exclaimed. “Why didn’t I think of this?”

“What?” Abbott Tova said, as she began replacing the items she’d removed from her chest.

“I said, I should have thought of this!”

Sister Sam bowed three times, turned around counter-clockwise twice, and left with the bag of earplugs, amazed as always at the wisdom and compassion of the great Abbott.

A stinging story from Zen Master Tova Tarantino Toshiba: The Illustrious and Delusional Abbess of Satire.

A woman who had her crops and family washed away in a flood (which had been caused from a break in the levee, which the government had previously said could withstand any amount of rainfall) came to Abbott Tova for comfort and advice.

“I’ve lost everything,” the woman wept. “I have nothing left.” The Abbott remained silent. “There is no where to go and no one left to comfort me.” The woman continued to cry. The Abbott did not reply. “What am I to do?” After sobbing for another ten minutes, the woman looked pleadingly at the Abbott. “Why did this happen? Why did it happen to me?” Abbott Tova closed her eyes for a few moments, opened them again, and smiled, but did not utter a sound. “Why won’t you say anything? Please give me some words of wisdom, some advice, some hope.”

“I do not have what you seek,” the Abbott finally said. “I cannot dish out false hope or advice and we have no means of helping you. The fact is that we all lose everything sooner or later. In this instance, you have lost the people and things most important to you, sooner rather than later.”

“Yes. Yes,” the woman replied. “I’ve heard The Buddha’s teachings about impermanence and change, but have you no compassion or care? I feel lost and hopeless.”

“Listen to what you are saying. You ‘feel’ lost and hopeless and are ‘labeling’ your experience as suffering and grief. Who you are, who we all are, is but a compilation of elements in temporary co‑operation, with whom we identify as our self, as our ego, our me.”

The woman shook her head in disbelief.

“Okay. Okay,” the Abbott said. “Come here.” She opened her arms and nodded for the lady to come forward. She hesitated. “Come.” The woman arose and fell into the Abbott’s arms, who encircled her with her robe. The woman began sobbing once again. “Now. Now,” the Abbott soothed. “Everything will be alright.”

As Abbott Tova held the woman she spoke to the other sisters in the hall. “This shows how easy it is to get attached to people, personalities, situations, events, and things. I’ve done so myself, many times. If you are mindful however and pay close attention to what arises and passes away, you will see that it is all an illusion, a temporary state that comes and goes. It’s all a dream, make-believe.”

The woman who had lost everything and was being held, had had enough. She slapped the Abbott. Some nuns started to run forward, but the Abbott held up her hand for them to stay put.

“Was that an illusion!” the woman yelled. The Abbott smiled. “Does it sting?” The Abbott’s check had turned red. “If life is a dream and nothing matters than what are we here for?”

The Abbott smiled with a jester’s grin. “Thank you,” the Abbott said. “I was wondering how much longer I’d have to keep mouthing that nonsense before you’d snap out of it.”

The woman suddenly realized that she wasn’t crying any longer, nor feeling sad. Her emotion had turned to that of anger and rage. She backed away from Abbott Tova, bowed deeply, and returned to her flooded land to start her new temporary and illusionary life once again.