This is my latest creation from a block of orange alabaster stone from Colorado. I’ve taken longer on this piece than any previously, trying to get it to shine. The impressions (in case it’s not obvious) are supposed to be lily stems and petals. Here are some views and the spot in the house where it fits perfectly with the surrounding color. 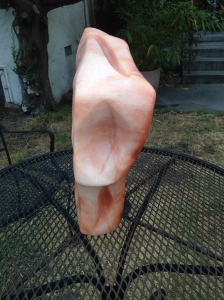 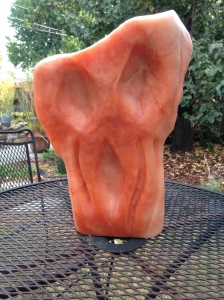 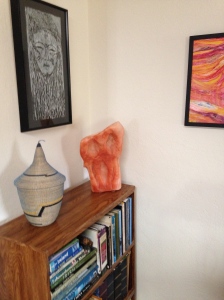 A missing excerpt from Zen Master Tova Tarantino Toshiba: The Illustrious and Delusional Abbess of Satire.

As many students have attested, one of the skills Master Toshiba was known for was her incredible ability to remain as still as a rock and blend into her surroundings like a chameleon. She could sit stand or lie in the same position for days, barely breathing, and seemingly unaware of her body, due to her deep states of concentration (or sleep). One incidence that exemplified this trait was when the monastery was being painted.

Several men and women from the village were hired to paint the outside of the monastery and the surrounding wall. They mixed their paints and began on a Monday morning. By Wednesday late afternoon they were halfway done. When they stopped for lunch, Sister Sitadown asked them if they’d seen Master Toshiba, as she’d been missing for two days. The workers replied that they hadn’t seen her and thought The Master was out of town.

“No,” Sister Sitadown said. “She had no other engagements. She told Sister Craven that she was going to the garden to sit and that was the last we’ve seen of her.”

“Would you like us to help look for her,” the painter’s asked?

One of the painters was walking close to the outer wall. He put his foot on the wall and lifted himself up to look over to the other side.

“Yeoh!!!” someone hollered. The wall moved and the painter fell to the ground. “What are you doing?” a voice bellowed. “You kicked me in the shin!”

It was then that the painter recognized Master Toshiba, as she stepped away from the wall. She’d been painted over in the same color as the wall.

“I’m sorry Master,” the painter replied. “I didn’t see you.”

“How could you not see me?”

“Well,” the painter replied. “Look at yourself.”

Master Toshiba glanced down at her clothes and lifted her hands in front of her face. She looked at the wall and started laughing. The painter laughed with her. They began laughing so loudly that the others came running to see what was so funny. Sister Sitadown arrived.

“So, there you are. We’ve been looking all over for you.”

“Well,” Master Toshiba grinned. “Here I am.” She held up her painted hands and everyone laughed again.

“Next time,” Sister Sitadown said. “We’ll have to attach a flag to your head.”

“A flag, or some bells around my neck, like a cow, so you’ll always know where I’ve wondered off to,” Master Toshiba added.

My latest attempt at stone carving. This is from a piece I bought at the Rock Stop in Navarro on the highway between Cloverdale and Mendocino last summer. It is probably from the Navarro River or near by. I’m not sure what kind of stone it is, but know it was pretty hard to work on. It has some beautiful grain, color (browns) and white lines. What started out as my attempt to make a thin wave or crescent moon, became something that looks like a dolphin.

Some recent photos of the garden life we are tending in our backyard. Sweet sun spirit of smell, sight, sound, sensation and soul. 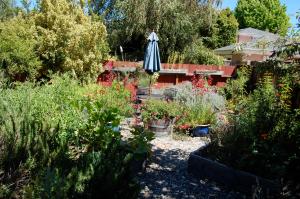 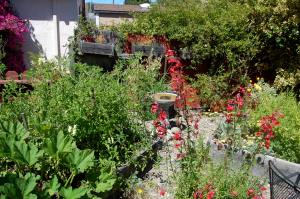 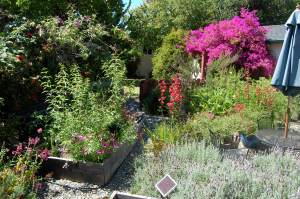 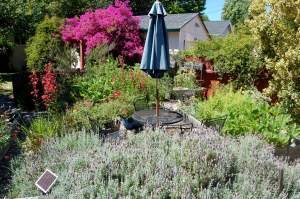 If children are our most precious resource (which is repeatedly mouthed by politicians and religious leaders), what difference does it make if their parent(s) and/or those willing to adopt them, are gay, heterosexual, bisexual, asexual, black, white or brown? The arguments against adoption by gay or different colored parents become increasingly ludicrous, unsubstantiated and unsupportable.

Everyone, who knows or is a gay parent, understands that sexuality has nothing to do with one’s ability to care for children. Every significant study of children raised by gay or different colored parents over the last two decades has shown there is no difference (other than a slightly safer home environment in lesbian households than in heterosexual ones) in how well-adjusted, successful and happy their children are as adults. Nor is there any significant difference in the percentage of children that become adults and identify themselves as heterosexual or gay, than in those raised in households with a heterosexual mother and father.

Our family has experienced almost every kind of parenting. From a previous marriage I have two amazing children. As a single father I adopted a wonderful son. After re-marrying we became foster parents to an incredible daughter and my wife birthed a beautiful little boy. The only kind of parenting I haven’t experienced is that of being a gay parent and/or a different color then our children, but many friends have had that experience and continue to provide their children the love and support we all need growing up.

I’ll never forget the birth of our friend’s daughter almost twenty-five years ago. She was a bright joyous addition to our world and is now a delightful, intelligent young woman, secure in herself and her own sexuality. She grew up with two moms and had as much or more love and opportunity than most.

Another friend adopted a boy and a girl who are both well adjusted, happy adults who fondly visit their parents and call them both Dad.

One of my foster sisters adopted an incredible little girl with multiple physical problems as a baby and continues to raise her, as a single, gay mom and is helping her grow into a healthy assured teen.

Even though my wife and I both identify our selves as heterosexual, one of my sons and one of our daughters are gay. They will make wonderful parents, not because of their sexuality or gender, but because they are good, caring, respectful human beings.

Common sense and human decency shows us the advantages of providing permanent safe homes for our children. Being part of a responsible, nurturing family with boundaries, limits and an ongoing container of love are the vital ingredients of a good home, not the color of the parents or guardians skin or their sexual orientation.

If some people, acting out of their own religious or political beliefs, choose to make or support ignorance and outdated laws that separate, divide and/or condemn others because of their race or sexuality, that is their sad right. On the other hand, if they really want to support “the family” and wish to make a lasting difference in the health of our nation, they can open their eyes and hearts and lend a hand to those who have taken on one of the toughest, most frustrating and satisfying jobs in the world – parenting.