Increase the eligibility age for Medicare to 67? Is Congress completely crazy?

We should be reducing the Medicare eligibility age, not increasing it. Healthcare costs when you reach 65 are greater than at any other time of your life. The notion that it’s good fiscal policy to wait a couple of years until the cost of treatment for many people will become more expensive due to delayed diagnoses and treatment is wrongheaded and cynical.

In fact, a small incremental increase in the payroll tax (currently just 1.49%) could cover everyone, young and old. That’s the direction Congress should take, and it’s exactly what we are fighting for in California.

At California OneCare, we’re educating and advocating for a single, public, not-for-profit health-insurance plan that will cover all Californians and be a model for the nation. Our programs educate and empower people on a personal, grassroots level because we believe that person-to-person contact is the only way to achieve lasting change with this complex issue. Check out our media page for more information.

Your support is appreciated by us and, yes, by economists:

Last week, more than 100 economists emphatically endorsed a national single-payer, Medicare-for-All system in the U.S. that covers all ages as the most humane and fiscally-responsible way to run a health care system: http://econ4.org/statement-on-healthcare

Your continued support and your donation at this time will enable California OneCare to expand outreach, organizing and advocacy in 2013.

With your help, we will win!

Happy New Year to you and your family.

Yours in health care justice,

From Nation of Change and New America Media
22 December 2011

When the last American troops pulled out of Iraq last week, Univision anchor and commentator Jorge Ramos tweeted in Spanish, “The last soldier is leaving Iraq, an unnecessary war, invented by Bush, that cost more than 100,000 lives and $1 trillion.” In another tweet, Ramos wrote in Spanish, “The war in Iraq is ending but you have to remember that no weapons of mass destruction were found there and that Saddam had nothing to do with 9/11.”

In the wake of the end of the Iraq war, U.S. ethnic media are taking a sober look at the last nine years of American military intervention in Iraq, and the meaning of the war in each of their communities.

The Iraq war will be remembered as “an incomprehensible war whose repercussions will continue for a long time,” according an editorial in Los Angeles-based Spanish-language newspaper La Opinión looking back at the eight and a half years of U.S. military intervention in Iraq that ended last week. 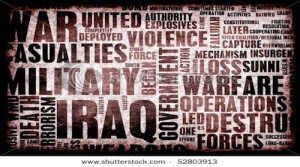 The editorial argues that the Iraq war, a legacy of the George W. Bush administration, was built on “endless arrogance that led to denials of reality, deliberate lies and deep judgment errors.” The war itself, editors write, has done more harm than good, leading to losses in human lives, money and geopolitical uncertainty.

An op-ed in New York’s Spanish-language El Diario/La Prensa, called “A Vain Victory in Iraq,” explains the reason for this: “We continue fighting terrorists because they never were in Iraq, preferring to have their base in the lawless lands of Afghanistan and their alliances with the authorities of Pakistan. We continue to fear nuclear weapons, and that’s because Saddam Hussein wasn’t the problem; Iran and Pakistan are to blame. Israel still has enemies. And if there is a flourishing democracy in the region, it is thanks to the popular movements in Tunisia and Egypt, not our military adventure in Iraq.”

“War is a dirty business,” the commentator wrote for El Diario/La Prensa. “For a war to have popular support, the leaders of a democracy like the U.S. need to use illusions. That’s why the authors of the war in Iraq – especially President Bush and Vice President Cheney – promised us a miracle. The bombs would explode. And as the smoke dissipated, we would contemplate a simpler and less threatening world.”

That wasn’t exactly what happened, the writer concluded. “The bombs exploded. But today we hear sobs. And what we see is smoke as usual.”

Arab-American media, meanwhile, were not convinced that the withdrawal of American troops meant the end of military intervention in the region.

Ahemd Tharwat, a professor at the University of St. Thomas in Minneapolis and host of the local Arab-American TV program BelAhdan, called the U.S. troop withdrawal “an empty symbol.”

“The war was a huge mistake,” he said. “It was costly and unnecessary, and I don’t know if we can recover from it.”

“The withdrawal is a joke,” Bakhit said. “It is just showing that America can realize its promise of ‘withdrawing,’” but, she said, “the American presence and influence will continue in Iraq.”

Bakhit noted that while “everyone has sadly paid a price in the war, Iraq is the biggest loser. The country has been completely destroyed as result of these nine years. And on top of that,” she said, “America’s relationship with the region, not just the country, has seriously worsened and will not improve.”

Media from the Iranian diaspora worried that the vacuum left in the wake of the American withdrawal from Iraq could provide an opportunity for Iran to step in.

“Less than a week after American troops left, an earthquake-like crisis is growing rapidly in Iraq,” noted a writer for Iranian.com, a website that posts stories by the Iranian Diaspora. “Some folks had warned that Iran would move to replace the Americans while others said Iraqi nationalism would prevent that. It’s starting to look like the first group was right.”

“For now Khamenei [Supreme Leader of Iran] would be playing a role similar to Milosevic in Bosnia,” the writer predicts. “He would encourage sectarian dominance next door and–rather than send armies openly, he would ‘loan’ weapons, offer trainers and send well armed ‘volunteers,’ stripped of their usual uniforms as the regime did in once prosperous Lebanon.”

Vietnamese Bayvut.com, based in Australia, also worried that Americans’ departure from Iraq could cause Iraq’s fragile democracy to disappear. Bayvut.com quotes a woman in Bagdad who said that she doesn’t “believe that real change has come. There are still bombings, assassinations, and the government is doing very little,” she said. “As for those who long for democracy in Iran, that hope has too dissipated with the Americans’ departure next door.”

Bao Moi newspaper, a Vietnamese Americans daily, adds that even as Iraqi citizens celebrate the departure of the U.S. military, “they are also worried regarding the new political fragmentation in their government that leads to issues of security and sovereignty of their country.”

Much of Korean media’s coverage of the Iraq war focused on South Korean businesses looking to take part in post-war reconstruction efforts.

An article in the Korea Herald from May celebrated the signing of a $7.25 billion contract between Hanhwa Engineering, one of South Korea’s largest developers, and Iraq’s National Investment Commission. The seven-year contract, which calls for the construction of a planned town 25 kilometers east of Baghdad, marks “the largest overseas construction project to be won by a Korean construction firm.”

Over its four-year presence in Iraq, South Korea dispatched some 19,000 mostly non-combat troops to the war-torn nation. The initial decision to take part in the effort proved controversial as most South Koreans opposed the war, though then President Roh Moo Hyun hoped to use it as leverage in efforts to move Washington toward a softer stance on North Korea.

As the war comes to an end, some Koreans are reflecting on the toll of the war for America. An editorial in the Korea Times notes that the nine-year conflict was fought on “false pretenses,” with the “misery and pain caused by the war far outweighing its glory.”

Paying a high price that included some 4,500 casualties, trillions of dollars spent and returning veterans struggling with post-traumatic stress disorder, the piece concluded that “in the end, the war sent America’s image abroad plunging.”

As American troops leave Iraq, some Chinese-American media outlets expressed concern that the U.S. military could take a renewed interest in China.

“The U.S. could redirect military resources from the Middle East to Asia, so that countries like South Korea and the Philippines, who are allies of the U.S., would receive more military support as the Iraq war ends,” said Joseph Leung, editor in chief of the Sing Tao Daily in San Francisco. “By directing more military resources to China’s neighboring countries, China’s development will be closely monitored by the U.S. and its allies in Asia.”

Chinese-American media also took a personal look at the families who have lost children in the war.