“Interesting. Provocative. Well seasoned.” This sequence of words passed through my consciousness before reading Treasure Hunt: Follow Your Inner Clues To Find True Success, by Rizwan Virk, and were present again, upon completion. It was then that I recalled the words were from an old food commercial (for what I don’t recall) that I often heard growing up, and they encapsulate many of the concepts, experiences, examples, and sumptuous courses provided within.

Treasure Hunt is “interesting”, and pertinent, to anyone who wishes to makes sense of the “clues” that come to us daily (awake and asleep). Mr. Virk says there is a Treasure Map of information at our fingertips, if we pay attention to the clues. Clues can be recognized as synchronicity, hunches, gut feelings, visions, deja vu, bodily sensations, and dreams. Clues are subjective and each person’s Treasure Map is unique. It is “provocatively” laid out in five sections, with digestible explanations, examples and reasoning (or intuitions). The accessibility of the content, to people searching for there own definition of success and from all walks of life, is “well seasoned” with a personal touch, and warmth, even though it is often explaining esoteric or scientifically complicated concepts.

There are 20 “Treasure Hunting Rules” that are explained throughout. They include – If it repeats it’s probably a clue – One clue leads to the next – Pay attention when you have a big dream – Honor your clues with a concrete action – Ask for a solution in your own way. One of the most delightful aspects of Treasure Hunt is how it combines emotional, religious, and metaphysical views, with those of science and quantum physics. The explanations of how to translate personal experience into the language of business, is most insightful.

The author defines syncronisity as, “the confluence of an inner thought(and/or feeling) and an outer event.” There are strong “Clues” that Treasure Hunt: Follow Your Inner Clues To Find True Success is much more relevant, “interesting, provocative, and well-seasoned”, than the commercial diddy that went through my head before and after the reading of Mr. Virk’s enlightening book.

Instead of seeing warning signs, big oil and the government are seeing dollar signs in the melting Arctic.

There’s still time to stop the drilling, but we need 1,635 supporters from California to raise $100,000 by our December 31 deadline to make it happen.

Can you chip in to help save polar bear cubs from starvation?

A polar bear cub struggles to keep up with its mom. She’s searching for sea ice to hunt for food, but the swim is too far. The cub doesn’t make it. It was a common story this year in the Arctic. 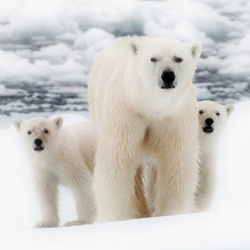 Soon there might be nowhere left to swim. This year Arctic sea ice reached its lowest level in recorded history and if current trends continue there could be no summer sea ice at all in the next decade.

But instead of seeing warning signs in the melting ice, big oil and the government are seeing dollar signs. Shell has been given permits to drill in the Chukchi and Beaufort seas of the Arctic. If we burn the oil under the Arctic, it will spell the end for the polar bear.

Please make a year-end gift right now and help us raise $100,000 by midnight December 31 to save polar bear cubs from a melting Arctic. We need just 1,635 donors from California to make this happen.

We have to stop the drilling before it’s too late.

Shell’s plans have already been put on hold until next year thanks to Mother Nature, the company’s own incompetence and the success of our global campaign. Now is our opportunity to make sure they don’t get the chance to go back.

In the last week alone we’ve flooded the White House with over 50,000 messages asking President Obama to suspend Shell’s drilling permits and call a ‘timeout’ on Arctic drilling. Now we need your financial support to ramp up our campaign around the world calling for the creation of a global sanctuary in the high Arctic.

We’re running a worldwide campaign to create a sanctuary in the uninhabited area around the North Pole off limits to industrialization. And this spring we’ll be leading an expedition to the North Pole and planting a ‘Flag for the Future’ there. The flag will send a message of peace, hope and global community and will be designed by the world’s youth as part of an international competition. A stark contrast to the flags planted by nation states fighting over the exploitation of resources.

We’ll also be taking a time capsule to the North Pole containing the names of the over two million people who added their name to our Arctic Scroll. Once there, we will lower it four kilometers beneath the ice and plant it on the seabed as a symbol for all humanity.

None of this is possible without your support. Please make a year-end gift today to help save polar bears cubs once and for all, protect the environment and ensure that we reach our goal of $100,000 by December 31.

Greenpeace is completely independent. We don’t take a dime from corporations or governments. That means we can do whatever is needed to protect the environment. It also means we completely rely on donors like you making a gift today to support all of our campaigns.

Thanks for all you do,