Endangered turtles and whales need your help. Deadly drift gillnets off the coast of California are threatening the lives of leatherback turtles, sperm whales, and other marine animals. These mile-long nets, left out overnight to catch swordfish, create an underwater “wall of death” for anything unlucky enough to swim into them. 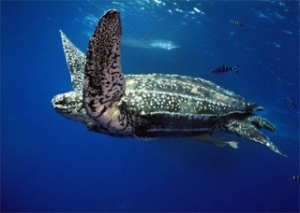 These nets should be banned, but instead the fishery may soon expand. We’re fighting to protect these rare and important creatures, but we need your support. Donate $10 today and your gift will be DOUBLED!

Sperm whales are one of the world’s most powerful, majestic sea creatures – but they’re no match for drift gillnets.

In just one year, an estimated 16 sperm whales were drowned in gillnets off the coast of California. That’s not counting the sharks, turtles, dolphins, and other open ocean animals that are caught in greater numbers.

These nets, which are supposed to catch swordfish, are notorious for killing some of our oceans’ most endangered species. They should be banned—but instead they continue to kill turtles, sharks, whales and more.

That kind of indiscriminate killing of ocean wildlife cannot be allowed to continue, so we are fighting to stop the use of swordfish drift gillnets off the coast of California.

You can help us meet our $40,000 goal if you chip in – and until October 31, every gift you give will be MATCHED for double the impact. Donate just $10 today and join the fight to stop deadly gillnets»

The destructive power of gillnets cannot be underestimated, even for the formidable sperm whale.

Up to 65 feet long and weighing over 50 tons, these deep diving whales can hold their own against nearly anything in the oceans. But sperm whales were prized by whalers in the 18th and 19th centuries for the spermaceti oil contained in their large heads, and were hunted mercilessly.

They grow slowly, taking time to raise their young between births. Without human interference, a sperm whale may live to be 70 years old. But a young whale caught in a net doesn’t just lose those decades of life—it loses its chance to have babies and help replenish a population still struggling from the effects of whaling.

Six weeks ago, we filed our formal intent to sue the federal government for violating the Endangered Species Act and the Marine Mammal Protection Act. This is precisely the kind of action that will force the government to protect endangered ocean wildlife threatened by gillnets.

While they can be expensive, these lawsuits work. A similar lawsuit in 2009 forced the National Marine Fisheries Service and the Fish and Wildlife Service to grant protections for the endangered loggerhead and leatherback sea turtles. Our fight against the use of drift gillnets in places where endangered sea creatures reside could save more turtles and whales – but only if we have the resources we need to win.

With your help, we can continue the fight for sperm whales and other ocean creatures around the world. Give $10 today and we’ll DOUBLE your support!»

For the oceans,
Emily Fisher
Oceana

Seabirds carry small fish from the oceans to their nests to feed their babies, but soon they may be finding less to eat. Humans are fishing more and more of these little fish to feed to larger fish in fish farms or to grind up as fertilizer, and the oceans are feeling the pressure.

These little fish provide food for everything from whales to seabirds to people, and science shows they are too important to the future health of the oceans and the earth to just be ground up into fishmeal or fertilizer.

A humpback whale may eat up to 2,000 pounds of little fish every day. If we overfish and cause a population collapse for the little fish, whales and other animals could have a hard time finding enough to eat.

But it’s not too late to take action. If we set up precautionary protections for small “forage” fish and let their populations grow, there will be more food to go around in the future—even for us humans.

Let’s save the little fish. Sign today to protect forage fish and keep the oceans fed»

Small fish swimming in schools are easy to catch. But it will become a lot harder if we catch them all, and animals like whales and baby birds will have to face the consequences of our actions.

For the oceans,
Emily Fisher
Oceana

Tell the State Department that you care about the health of our oceans and urge them to either take the lead on establishing a network of marine reserves or to get out of the way this summer.

There’s almost no protection at all for the world’s oceans. And it shows…

Companies like Chicken of the Sea are pushing some tuna and shark species to the brink of extinction in the Pacific Ocean with their destructive fishing practices.
Industrial fishing vessels are destroying the breathtaking coral habitats of the Bering Sea canyons and putting an entire ecosystem at risk.
Japanese, Icelandic and Norwegian whaling vessels continue to ignore international law and kill thousands of majestic whales from the Southern Ocean to the North Atlantic each year.
These challenges can be addressed together with a single solution — a network of fully protected marine reserves. So why is the State Department standing in the way?

It’s time they took action to protect our oceans. Urge them to take the lead in establishing a network of marine reserves before it’s too late.

The high seas are like the Wild West at the moment. It might be good for the companies that are making billions off the destruction, but it is killing our oceans. If we don’t start protecting and managing our oceans they aren’t going to survive. Marine reserves are a proven and cost effective tool for protecting biodiversity, rebuilding fish populations, and enhancing fisheries in surrounding areas.

The best chance we have to get the international community on the right path toward creating a network of protected areas is this summer in Brazil. The US delegation is developing their position right now. It’s the perfect time to let them know you are paying attention.

A global network of fully protected marine reserves would benefit sea turtles, whales, tuna, seals, narwhals and any other creature (including humans) that you can think of. We’ll be at the meetings this summer working hard for this outcome. Without your support, it won’t matter.

Send your letter to the State Department today and tell them that we need the US to join the G77, the European Union, and most of the rest of the world in standing up for marine reserves.

Thanks for your help.

From Nation of Change and Yes! Magazine
by Madeline Ostrander

The Biggest Fight of Our Time

As one of the best-known writers on the world’s most dire environmental problem, climate change, Bill McKibben has long walked the razor’s edge between hope and fear. In 2010, he published Eaarth: Making a Life on a Tough New Planet, a sobering account of what climate change has already unleashed—the ways in which the places we live, the water, weather, seasons, ecosystems, and oceans are changing irrevocably. McKibben also founded 350.org, one of history’s largest and most ambitious political movements, uniting people around the world to fight climate change.

In this interview, YES! got personal with McKibben: Where does he find hope? What role does faith play for McKibben, a longtime Methodist Sunday school teacher? How does small-town Vermont, where the writer now lives, shape his ideas and activism? And what’s the best advice for anyone feeling overwhelmed by the enormity of what McKibben calls “the biggest fight of our time”—the fight to save the planet?

Go to Nation of Change or Yes! Magazine to watch video.