Blood for Oil In Syria

By Stephanie B. at Avaaz.org.

For months, Syria’s brutal President Assad has paid henchmen to wage war on his own people. Governments across the world have condemned these atrocities, but key European leaders could cut off the cash flow that finances this bloodbath. 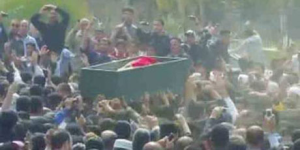 Germany, France and Italy are the three main importers of Syrian oil. If they move to impose immediate EU sanctions, Assad’s slaughter funds will dry up. Assad has ignored political appeals for him to rein in his assault, and EU leaders have discussed ramping up sanctions, but only a massive global outcry will push them to act urgently.

We have no time to lose — every day dozens of Syrians are shot, tortured or disappeared simply for calling for basic democratic rights. The EU can stop funding the crackdown now. Click below to sign the petition to EU heads of state to immediately adopt oil sanctions on Syria:

We have all watched and read about the horrific violence in Syria — much of the coverage coming from Avaaz-supported citizen journalists who are risking their lives to report on Assad’s crackdown. And now we have a chance to turn our horror into action. Experts say EU oil sanctions will seriously disrupt cash flow to Assad’s cruel army without significant negative consequences to either the European economy or the Syrian people.

Almost all Syria’s exported oil is purchased and refined by Germany, France and Italy, but these governments have yet to use their key trade relationship with Assad as leverage to protect the Syrian people. Still, they have denounced the violence, and newspapers report that some EU leaders are already pushing for oil sanctions. Let’s demand that they ramp up the pressure and push through oil sanctions immediately and cut the engine of Assad’s murderous regime.

Avaaz members have played a crucial role in supporting Syrians in their demands for freedom, democracy and human rights. Much of the footage and information shown around the world is funded by small donations from Avaaz members worldwide. Let’s build the momentum for lasting change as the violence against the Syrian people escalates and insist the EU take immediate action now.

With hope – Stephanie, Pascal, Morgan, Alice, Ricken, Wissam and the rest of the Avaaz team.

Visit Azaaz.org and do what you can.