An excruciating excerpt from Zen Master Tova Tarantino Toshiba: The Illustrious and Delusional Abbess of Satire.

Sister Bonsai and Abbott Tova were on their hands and knees digging up the soil in the garden to plant some hemp seeds. When Sister Bonsai lifted a rock to make way for the next row, a cobra raised its head and spit in her direction. She fell backwards just in time to miss being hit in the face. Abbott Tova grabbed her arms and quickly pulled her farther away from the deadly snake. 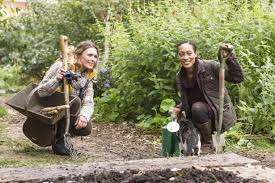 “Oh my!” exclaimed Sister Bonsai. “That was close.”

The Abbott nodded. “It’s good you’re fast on your feet or should I say rapidly falling? At least you fell in the right direction.”

“No problem,” the Abbott replied. “I thought we’d weeded out all our slithery friends.”

“Friends? How can you call that awful creature a friend? It almost killed me.”

“They probably thought you were trying to kill them. How would you react if you were sleeping in a cool shady spot under a large solid mass and suddenly the roof was lifted away and a giant shadow hovered over you?”

“You’re right,” Sister Bonsai replied. “I never thought of it like that.”

They both watched the cobra slither away, down towards the gully to find another safe shady area. As they stood and made their way to the shed for the bag of seeds, Sister Bonsai looked puzzled, still a little shaky, and deep in thought.”

“What are you thinking?” Abbott Tova inquired.

“Why were such deadly creatures created and other nuisances like fleas and mosquitoes?”

“They just are. I’m not sure if they were ‘created’ as such, but perhaps existed previously in other forms.”

“And why,” Sister Bonsai continued, “do some animals eat their prey while they are still alive? It seems especially cruel and barbaric.”

“Why does suffering exist?” replied Abbott Tova. “Why is their pain, loss, sickness, discomfort, old age, and death?”

“Those are deep questions Master, but your question does not answer my question.”

“Nor should it,” said The Master, as she scooped some seeds into the bag they were both holding.

“If there are no answers and only more questions, then what’s the use in trying to make sense of anything?”

“Indeed.” Abbott Tova grabbed another spade, as she and her student walked back to the field.

“So, you’re saying there is no need to figure anything out or make sense of the world we live in?”

“As a famous songwriter and activist once said,” The Master surmised, “We’re just sitting here watching the world go round and round.”

“That’s sounds nice, but doesn’t solve any of our problems.”

“He also said, ‘There are no problems, only solutions.’”

“Ah, that’s a good question.” Abbott Tova replied thoughtfully. “Here, take this.” She handed the Sister the bag. “Let’s plant these seeds and give them some water.”