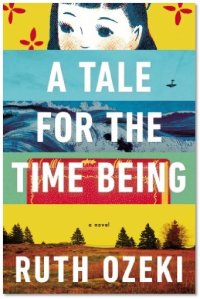 “Ruth Ozeki’s A Tale for the Time Being is one of the best novels of 2013—and will surely inhabit that position for years to come.”

However you envision or conceptualize life, you will never see it quite the same once you’ve read this brilliant story. “Brilliant” is a strong and suggestive superlative, but it fits this story like the insistent tolling of a bell calling for one’s attention.

Down to earth and intellectual. Filled with judgments and acceptance, separateness and interdependence. Complicated, yet simple. Ms. Ozeki’s characters question their thoughts, feelings, and actions—even how they respond to suffering. They ask whether their choices and lives make a difference, what is the meaning of conscience, and how to explain the nature of existence—and they do so in the pages of a beautiful tale of families struggling to survive, understand, and share their love.

Ruth, a novelist who lives on an island in British Columbia with her husband Oliver, happens upon a diary she finds in a sealed lunchbox she discovers among some kelp that’s washed to shore. The diary is that of a sixteen year old in Tokyo, Japan, named Nao.

As Ruth begins to read the diary—which describes Nao’s family, her thoughts of suicide, and her close connection with her 104-year-old great grandmother Jiko (who is a Buddhist nun living in the area of the 2011 earthquake and tsunami)—we are pulled into Ruth’s thoughts and feelings about what she is reading as well as its impact on her, her husband, and others living on the island.

Every person, animal, life form, building, city, town, and forest in this story feels real and congruent. You can almost reach into the book and pet the cat, yell at the bullies, shake Nao’s father, hear the wind, see the crow take flight, and feel the ancient, chilly, wooden temple floor beneath your knees as you bow.

There are so many exquisite lines of prose within A Tale for the Time Being, that it is difficult to choose a few that will give readers’ a taste of this sweet, caustic, entertaining, and captivating novel. Nonetheless, here are a few morsels.

When Ruth first reads the diary, she describes the letters. “They were round a little bit sloppy (as she now imagined the girl must be, too), but they stood more or less upright and marched gamely across the page at a good clip, not in a hurry, but not dawdling, either.”

Nao writes of a moment when she is holding Jiko’s hand. “I was still thinking about what she said about waves, and it made me sad because I knew that her little wave was not going to last much longer and soon she would join the sea again, and even though I know you can’t hold on to water, still I gripped her fingers a little more tightly to keep her from leaking away.”

Ruth speaks of time and how it interacts with attention. “At the other extreme, when her attention was disengaged and fractured, she experienced time at its most granular, wherein moments hung around like pixels, diffused and suspended in standing water.”

It sounds like Haiku poetry when Jiko is telling Nao about her son (Nao’s great uncle) who died in World War II. “A single frog croaked, and then another. Jiko’s words dropped like stones into the silence in between.” Jiko explains to Nao (who had told Jiko about it feeling like there were fish flopping around in her stomach when she felt grief or was being bullied) that the loss of her son was like a whale in her gut and she was learning to open her heart so the whale could swim away.

A Tale for the Time Being is more than a lovely piece of literature; it also explores science, philosophy, nature, history, psychology, biology, physics, Japanese culture, and the nature of consciousness. There is also a healthy dose of Buddhism and meditation thrown in with subtle precision integrated into the characters and storyline without dissemblance or force.

Read complete review and others, at New York Journal of Books.