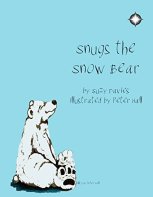 A sweet children’s book (for ages 4 and up), with a lot of animal characters, nice people, and of course the star of the show, Snugs, the snow bear. Snugs is not necessarily a polar bear, though he is off-white and lives in Greenland.

Snugs is set adrift when the ice he is on has melted, and goes towards Iceland. On the way he is discovered by a boat (ship Prince Eleanore) and the crew and passengers help him out. It is here that he meets Carla and James, and their grandmother (Mrs. Merryweather) who live in the Isle of Wight (England).

Snugs the Snow Bear combines some beautiful events (the Northern Lights, and visiting sites in Iceland) with the realities of global warming and its effect upon humans, animals, climate and the earth in general.

At first, I was taken slightly aback by the animals (some magical moose, etc.) and people (including Captain LightOwler and Rosanne) being able to talk to one another, and understand each other, but after awhile that concern faded into the background and fit with them all having to live on the same planet.