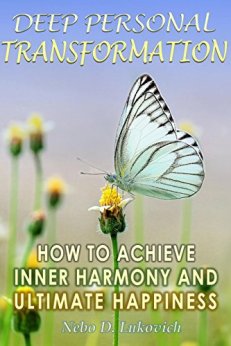 In my life, and that of most I know, I have learned how personal transformation can be the result of suffering and hardships. I’ve written extensively about resilience and the insights people can have when going through intense loss and trauma. In Deep Personal Transformation Mr. Lukovich provides an additional way to make such progress, or develop this inner knowledge, without having to jump into the fire before finding the water to put it out.

He writes, “Permanent transformation can essentially be achieved in two ways: through suffering or through wisdom. Either we painfully push forward through any obstacle or disappointment, learning our lessons the hard way and emerging from the experience more mature, or we chose a path of love, consciousness, and wisdom, which also makes us mature, but in a far more enjoyable and effective manner. This book is all about learning the second, the superior way.”

By integrating neuroscience, psychology, and quantum physics, with accompanying illustrations, graphs, and quotes, Mr. Lukovich presents his reintegration technique. He says it is a result of over two years of daily meditating and mindfulness practice. The five pillars of this methodology are: 1) There exists an underlying reality, 2) Everything is interconnected, 3) The outer world is a mirror of our inner being, 4) Apparently negative inner structures have a positive origin and purpose, and 5) This is a world of polarities. In many ways, it all comes down to transforming the mind content with presence, also known as mindfulness.

The Inner Triangle is the main technique and consists of: Dissolving the Temporary I (DTI), Moving to the Heart (MH), and Dissolving the Temporary I Plus (DTI+). Though some of these practices and exercises at first sound complicated, the author breaks them down into discernible parts which are easily digestible and easy to use. Deep Personal Transformation is practical, methodical, and comprehensively designed. Mr. Lukovich states it so eloquently in closing. “Countless lessons are here to be learned, at our disposal, if only we are aware of them. In these lie the real strength of this system. Through your personal work and meditation and mindfulness, you will elevate your consciousness to unexpected levels.”

From The New York Journal of Books

This Is Us: The New All-American Family
by David Marin
Reviewed by Gabriel Constans

“It was no mystery why California had 98,000 children stuck in foster care. There were not 98,003 because I was stubborn.” Thus proclaims the proud single father David Marin, who adopted three young siblings and lived to tell about it. Not only do he and his children survive, but they also thrive.

If This Is Us: The New All-American Family were simply another ill-fated personal memoir about someone who believes his or her life story is worth sharing but has no storytelling chops to make the read worthwhile, it would have gone quickly to the bottom of the “to read” pile or been dumped in the recycling bin.

Lucky for us all that Mr. Marin has not only withstood the tribulations of parenthood, racism, and ignorance, but also is a fantastic writer who knows how to tell a tale that is equal parts heartbreaking, confusing, honest, and inspiring. This guy can write.

Here are some examples of his adept use of metaphor. “There were small mammals with more parenting experience than me.” And, “I wanted to help them before their pain metastasized, like mine, from memory to rebellion, permanently roosted in their psyches like the beaked shadow of a dark-winged bird.”

This is the story of a single professional man who gets fired for going to adoption classes (and later wins a lawsuit against the company that did so), learns about the frustrating and mind-boggling social service system in California, and proceeds to fall in love with three young children who have been through the ringer.

In spite of his own perceived inadequacies as a new parent who continually steps in one mess after another, he learns the ropes. Surprisingly, or perhaps not, it is the inadequate and inept social services system that presents the greatest obstacles—not the biological mother nor the trauma the children have experienced that reflects in their behavior making them impossible to place in a foster home for any length of time.

Frustrations with county classes moved, postponed, or canceled altogether; court dates changed again and again; a distant relative coming out of the closet at the last minute; or prejudice from some county social worker with a chip on her shoulder about a single father adopting children of an apparent different race—all are grist for the mill in Mr. Marin’s winding road to final adoption.

At one point, while thinking of his own father, he says, “He was the Hispanic father of pale kids. I was the pale father of Hispanic kids. We were a human anagram.”

There is a telling moment in this story when the author is finally made privy to his children’s records and he sees what has (or hasn’t) been done to protect them and/or support their adoption. He says, “My Kafka transition from an observer on the wall to a fighter on the floor took just a few moments—I would protect my kids, not with Social Services, but from them.”

Read the rest of the review at The New York Journal of Books.