From Trauma To Peace

From Trauma to Peace

Can we transform TRAUMA and its debilitating states of anger, violence and hate, to PEACE – compassion, forgiveness, hope and love? We can, and it’s beginning to happen in isolated regions of Africa.

Kamal, a young Rwandan boy, suffered many atrocities. The scenes of his mother dying of AIDS and his uncle being killed in front of him during the 1994 genocide were always before his eyes. A massacre he witnessed in a refugee camp in Uganda added to those terrifying images; images that were always in front of him, like they were happening today. The traumas of the past haunted him. They gripped him in fear and limited his ability to move into a hopeful future.

Then, a team of therapists brought TFT or tapping (a unique healing modality using the body’s meridian system) to the orphanage. Kamal began tapping, struggling to focus on the horrid past, but within minutes, he jumped up and shouted, “It’s gone! It’s gone!” He danced around the room. He pulled his therapist up and danced with him. He dashed outside and ran around joyfully. He came back in and hugged his therapist. He became free of the past. Kamal can now feel joy, and he can focus on his future.

Jean Pierre, a Rwandan man, was forced to watch his wife and children being massacred. He was then attacked himself and left for dead. He bears the wounds from the machete on the back of his head. He heard about the miracle tapping the orphans were doing and came to ask for help. He too had nightmares and flashbacks for over 12 years. One of the therapist team members tapped with him, and he too got over his nightmares and his anger and hatred toward others. But the real telling change was not just relief of his suffering, it was his spiritual transformation. Three days later, he attended a church service at the orphanage where he said he had been given the gift of healing, and he volunteered to take three orphaned children into his home and raise them. He had his life back and was now reaching out with love and forgiveness.

There are now over 100 Rwandan community leaders using TFT to treat members of their communities, members like Jean Pierre and Kamal. The mission of the TFT Foundation, a 501(c)(3) nonprofit organization, is to spread the use of TFT and its profound benefits throughout the world. Many Rwandan and Ugandan therapists are already trying to help us do that.

The TFT Foundation has developed and proven a model that can bring TFT training to any traumatized community, where the leaders can be trained to help their fellow countrymen. In three random controlled studies (two in Rwanda and one in Uganda – one published and two being prepared for publication), the results have been highly significant. Two-year follow-ups have demonstrated that the results not only last, but the symptom reduction improves over time.

The Foundation has documented the changes and healing of this region in Rwanda, and the beginning of the healing process in Uganda, over the last six years. The completion of the documentary, “From Trauma To Peace,” will enable us to share this model of healing trauma with many more regions of the world. The film will be of the quality needed for PBS and film festivals.

A mayor in the Northern Province of Rwanda commented: “People who I have never seen smile, are smiling. People who were not productive, are now productive.”

Please help the TFT Foundation continue sharing and expanding this transformational healing on a global scale. This film will help us create the awareness that entire traumatized communities can help themselves and others end suffering.

The film and its distribution will serve as a way to raise money to help the Rwandans, Ugandans, and others use TFT to help their countrymen. Your donation will go toward the completion of the filming, editing, promotion, and distribution of this important documentary. Additional funds from the campaign will go directly to the centers actually helping the people, assisting them to become self-sufficient and productive. People CAN break the cycle of violence and feel hope and joy again. Please help us in our efforts to bring peace to our world, one person–and one community–at a time, through TFT.

A Drop In the Bucket 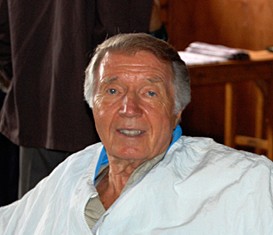 “I saw over five hundred kids walking out of the Congo three years ago and decided I had to do something about it,” says Rev. Paul Oas. What he did was organize the church he attends in San Diego, California to provide support and funds for an orphanage in Rwanda (called ROP Center for Street Children) and put together a team of people to visit the orphanage of 150 children and assist them with health care, clean water, trauma relief, job training and hope for a future in a country that is still reeling from the 1994 genocide. “I feel like I’m in my twenties again,” says Pastor Paul, as his seventy-five year old eyes light up.

For three weeks Pastor Paul, who likes to be called Paul, helped coordinate a team of concerned health professionals in the capital of Rwanda, Kigali. They worked from morning until night providing children at the center with the first medical check up and exam they had ever had, teaching older youth sewing and quilting skills, in order to have a vocation once they left the orphanage and connecting the center for orphans with local clinics, dentists and a water filtration company. They also provided classes in Thought Field Therapy – TFT (a meridian based treatment that eliminates symptoms of post traumatic stress) and did a follow up study with children they had treated the previous year. Other members of the team taught classes on TFT to orphanage directors, ministers and other social service organizations from all over Rwanda.

Paul says, “When people without church backgrounds see things like this they are touched as well and have a change in values. Too often religion has become more interested in form than in function. In the twelfth chapter of Romans Paul says, ‘present your bodies as a living sacrifice and this is your reasonable worship’”. In other words, make sure your walk matches your talk.

There are countless disappointments and frustrations with this kind of work and mission, such as never having enough resources and constant feelings of helplessness, but Pastor Paul believes these realities are part of the journey. “I still get overwhelmed and feel like it’s all a drop in the bucket. The way I take care of that is to keep getting others involved and having it expand.” He says his father and mother (who was a nurse) taught him to always “find a way” and believed “we’re all one family”.

Working in Rwanda is not the first time Paul has gone outside his community in southern California. He has also organized trips to orphanages in Baja Mexico and worked with survivors in Kosovo, as well as visiting a refugee camp of 100,000 on the border of Sudan. He believes that words mean nothing without corresponding action and often quotes a passage from James 1: 27, which states, “True religion and uncorrupted, is to visit the orphans and the widows in their distress and to keep one self unstained from the world.”

After traveling and serving people in Kosovo, Mexico and Africa, Pastor Paul finds it challenging to live in such an affluent part of the world. Instead of judging or condemning those with affluence, he realized that most of them want to get involved and giving to others provides meaning for their lives as well. “People start blossoming,” he says. “Our mission is to help one another mobilize and find our individual gifts.”

The work Paul has done at the ROP Center for Street Children in Rwanda has also blossomed. Not only have members of his church at Christ Lutheran in San Diego committed funds and resources, but Pastor Paul has also reached out and received support for the orphans from concerned individuals and religious and non-religious organizations throughout the country and around the globe. “When you have the compassion to do something,” Paul says with a smile, “you’ll find roadblocks that will stop you, but don’t let them. The roadblocks are for some purpose. When people see your passion for God and His creation, they get involved and new paths appear.”

Pastor Paul Oas has not let roadblocks, government restrictions, lack of funds, cultural misunderstandings or church politics block his path to helping children or prevented him from bringing people of diverse backgrounds, beliefs and areas of the country to “get on board”. “Most people say they admire me for doings this, but I don’t want to be admired,” Paul says. “What they are really saying is that it is wonderful what you’re doing and I wish I could help. The greatest admiration is when they contribute or get involved. Some people make a show about how much they love God, but Jesus said, ‘How can you say you love God who you haven’t seen, when you don’t love the brother who you have seen?’”