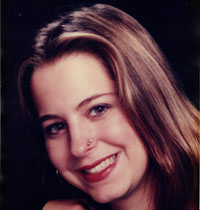 Our beautiful 36-year-old daughter Amber Schinault was a victim of domestic violence in Maryland. Amber was first assaulted by her boyfriend with his car on June 1st, 2012, where she had three fingers partially amputated. On June 7th, 2012, Amber with both hands bandaged from her operation, stood before a judge and obtained a restraining order against him. Our daughter was the most loving and kind individual.

After living with us for 50 days while in recovery, Amber went back home on July 19th, 2012, because she missed her four rescued dogs so much. On July 22, her ex-boyfriend broke into her house, waited for her to get home, and then murdered her. The restraining order had no effect because he was determined.

We started a petition in memory of Amber to help other victims of domestic violence like her. Will you sign it?

In 2010, a bill was presented to start a program for a GPS tracking device to notify law enforcement officials and the victim whenever a violator enters a restricted area. Since then, this bill has been in limbo in Maryland. Our goal is to notify the legislation just how important this program is not only in Maryland, but for the entire U.S.

If Amber’s ex-boyfriend had a GPS tracker in place to alert authorities when he entered areas near her, Amber still might be alive today.

Please help us make a difference and save women like Amber in the future.

Thank you for taking action,

This month, a shocking Department of Defense report estimated that 26,000 sexual assaults took place in the military last year. This is disgraceful: one sexual assault is too many.

But still thousands of rapes in the military are never reported, let alone brought to trial. There is a dangerous deafness to sexual assault in the military and many survivors suffer in silence.

Stand with Victims of Military Sexual Assault: Add your name to join the fight to fix the military’s response to sexual assaults.

Democrats in Congress are taking a stand to better protect our service men and women — but they need our support to ensure that independent prosecutors are deciding whether to prosecute sexual assault cases.

Will you step up and add your name in support of the Military Justice Improvement Act?

Thank you for being a part of this.

Trigger warning: this email contains information about sexual assault that may be upsetting to survivors.

She was 23, with dreams of being a doctor. But two weeks ago, she was gang raped by six men, savagely beaten and thrown out of a moving bus in Delhi. The still unnamed woman who has become “India’s daughter” just died of her injuries in hospital.

Namita Bhandare knows the constant fear that goes with living in Delhi, nicknamed India’s “rape capital”. Like others, she long believed that nothing would change. But the outpouring of anger and sadness now has convinced her that this could be a turning point for women like her.

The tragedy has sparked vigils and protests, and over 100,000 Indians have already signed Namita’s petition to the Prime Minister. As the story reverberates around the world, being covered by every major news outlet, there’s a chance for Americans to help show the Indian Prime Minister that their international reputation is on the line if they fail to act.

The story of “India’s daughter” has sparked deep grief and fury across India. Grief for her horrifying ordeal, and fury that politicians have ignored the huge problem of rape and sexual violence against women for so long.

According to crime statistics, a woman is raped every 22 minutes, and most rapists are never prosecuted. Women are often blamed for their own rapes, police refuse to hear reports from victims, and some women report being harassed by the very authorities they hope will protect them.

Politicians are being faced with some uncomfortable truths. But Namita says that unless people seize this moment of national consciousness, the chance to change anything will slip away. That’s why she’s asking for global support to show the world is watching.

Click here to sign Namita’s petition, and ask the Indian government to do everything in its power to make sure tragedies like this are never repeated.

Thanks for being a part of this,

Kristiane and the Change.org team

Last night a Republican candidate for the U.S. Senate claimed that raped women should be forced to carry their rapist’s baby to term because their pregnancy — a result of rape — is a “gift from God.”

Tell Republican Senate candidate Richard Mourdock: Rape is a heinous act of violence, and no politician should tell women that any part of being raped is a gift from God. Click here to automatically sign the petition.

Mourdock’s exact words — in the debate with his Democratic opponent — were:

“I struggled with myself for a long time but I came to realize life is that gift from God, even when life begins in that horrible situation of rape. It is something that God intended to happen.”

Mourdock is a staunch believer that abortion should be illegal even for victims of rape and incest. But even for an anti-abortion Tea Party Republican claiming that any part of of being raped is for the woman a “gift from God” is appalling.

Make no mistake: Tea Party Republicans like Mourdock will stop at nothing to send women back to the Stone Age. And if he wins election in Indiana, he will put Republicans one seat closer to control of the Senate. And that could mean that extreme anti-woman legislation passed readily in the House — defunding Planned Parenthood, redefining rape, blocking access to birth control — would now have a shot at passing the Senate.

Rape is rape. And it is not acceptable for a Republican politician campaigning for one of the highest offices in our government to tell women that if they get pregnant as a result of rape, that it’s a “gift from God.”

Thank you for standing up for women.