On the 12th floor of a none-too-modern office building in downtown Brooklyn are the offices of the law firm Kornblau & Kornblau. Tucked away deep in this warren of dim rooms is the brain center of InsideClimate News, the newest member of the elite fraternity of Pulitzer Prize winners.

How small an operation is InsideClimate News? Well, when I visited publisher and founder David Sassoon there Tuesday afternoon, I doubled the occupancy rate. The five-year-old nonprofit has seven employees total, but the other six are scattered across the Western Hemisphere, from Tel Aviv to San Diego. “If we get somebody in Hawaii or Australia or Japan, we’ll have the globe covered,” Sassoon says.

In winning the Pulitzer for national reporting for a series on the poor regulation of oil pipelines, ICN beat out the Boston Globe and the Washington Post, two newspapers with around 900 journalists between them — not to mention all the news organizations that didn’t make it to the finalists’ circle. How could a crew of seven beat behemoths that live for Pulitzer day?

“When you do have huge operations, you’re being pulled in lots of directions,” says Sassoon. “We’re covering one thing. We’ve been doing this 24/7 for five years.”

A small budget is only a handicap if you’re trying to attack the problem in the same way as news organizations with big budgets, he says:

“I don’t know why it has to be that expensive. We probably spent 10% of what a big, well-endowed newsroom would spend, and that’s in terms of salaries and everything. We didn’t do a lot of traveling. We didn’t have the money, so we didn’t think about it. We were just figuring out out how do we get the story. I think it’s possible to do a lot of journalism on low budgets without necessarily feeling like you can’t do the job you want to do. Maybe a lot of the newsrooms can do it more efficiently than they think they can. There are plenty of individuals, newsrooms, little ones here and there, that can do this kind of work.”

That said, ICN wants to be a slightly larger news organization. “We think to do our job fully, we need to be 20 to 25 people,” says Sassoon. “As we work out our plan, I want to have a newsroom in New York. We need a hub.”

From Nation of Change by Rebecca Leber
December 17, 2011

Speaker of the House John Boehner (R-OH) insists that the GOP-led House will fight for the cash-rich oil industry at the expense of the middle-class payroll tax cut. “If that bill comes over to us,” he told reporters, “I will guarantee you that the Keystone pipeline will be in there when it goes back to the United States Senate.” Project advocates, who include Boehner and Senate Minority Leader Mitch McConnell, misrepresent its economic benefits to favor the oil industry, throwing out claims that Keystone XL creates “tens of thousands of jobs.” 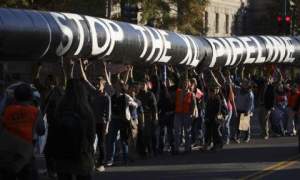 However, studies conducted independently of TransCanada find much smaller jobs numbers, far from “tens of thousands.” An oil contractor hired by the State Department reported it would create between 5,000 and 6,000 temporary jobs, while an independent study by Cornell University found it would create only 500 to 1,400 temporary jobs. Once the costs of the increased pollution and risk of oil spills is factored in, Cornell found, the jobs impact is likely to be negative. The “118,000 spin-off jobs” number used by TransCanada received two Pinocchios from the Washington Post Fact Checker:

As opponents have documented, if the capital costs are lower than predicted, and if the multiplier is smaller, then the number of “spin-off jobs” can shrink dramatically. The same goes for the estimates of “permanent jobs,” which depend also on the price of oil.….Among the list of jobs that would be created: 51 dancers and choreographers, 138 dentists, 176 dental hygienists, 100 librarians, 510 bread bakers, 448 clergy, 154 stenographers, 865 hairdressers, 136 manicurists, 110 shampooers, 65 farmers, and (our favorite) 1,714 bartenders.

How did a grossly exaggerated number become the prevailing argument to build the pipeline? The reason is the oil lobby is in overdrive. At least 42 companies have lobbied on Keystone XL since 2009, and 33 actively campaigned in the most recent quarter.