Arrested for posting a note to Facebook?! If there was ever a need for a “Dislike” button on Facebook, this is it.

But when you log off, you probably don’t expect the police to come knocking on your door.

That’s what happened to Jabbar Savalan, a 20-year-old Azerbaijani student activist framed and punished by his government for calling for a protest on Facebook. 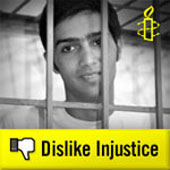 The Azerbaijan government’s assault upon the right to freedom of expression is a travesty.

Tell the authorities that you “Dislike” injustice. Sign Amnesty’s online petition calling for the immediate and unconditional release of Jabbar Savalan.

Jabbar is one case in this year’s Write for Rights campaign, Amnesty’s annual human rights letter-writing marathon. Hundreds of thousands of people will be participating this year, writing letters of hope and solidarity to free prisoners of conscience and combat injustice worldwide.

Maybe this is your first time writing for rights, or maybe you’ve taken this action before. Now’s the time to pledge your participation in this event – starting with signing this online petition for Jabbar.

During Write for Rights, December 3-11, Amnesty will deliver the petition signatures along with a giant Facebook-inspired “Dislike” thumbs-down sign to Azerbaijan’s diplomatic offices in the U.S.

Jabbar knew something was very wrong that night. Police never read him his rights. He wasn’t searched right away. He was manhandled in the police vehicle.

It was only when Jabbar arrived at the police station that authorities did an official search, and that’s when they “discovered” marijuana in his outer jacket pocket. It was all too convenient. Officials in Azerbaijan have a history of using trumped-up drug charges to smother dissent. Jabbar maintains he’s never used drugs in his life.

Jabbar was jailed for a Facebook post. If we don’t call out authorities on abusive behavior, wherever and whenever it happens, it will only get worse. They will crush and crush and crush, ever more recklessly, inhumanely and unlawfully.

If freedom is something we cherish, then we must defend it. Jabbar Savalan was jailed because of his beliefs, and as human rights defenders, we can’t let this stand.

Add your name to Amnesty’s petition calling for Jabbar’s release.

P.S. Write for Rights is a powerful, inspiring event – the largest grassroots letter-writing campaign in the entire world. Put pen to paper and deepen your commitment to human rights. Find Write for Rights events near you and learn more by visiting amnestyusa.org/writeathon.

Sliver of Hope in Burma